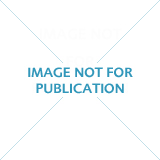 Letter from Carol Parsons, of Oxford University Womens Boat Club, to Pauline Baillie-Reynolds (AKA Pauline Churcher), Secretary of the UWRA. Letter is regarding the willingness of OUBC to assist UWRA. Also details the tracing of a cheque, and the unwillingness of Oxford to participate in a rerow. Letter is undated, but was replied to on 15.3.65. Part of an archive of material from the University Womens Rowing Association.

A handwritten letter from Michael Brooks in New College, Oxford, to his parents after the 1943 Boat Race, in which he rowed. He describes there being 7000 people watching the race with aeroplanes overhead and it being recorded for television. 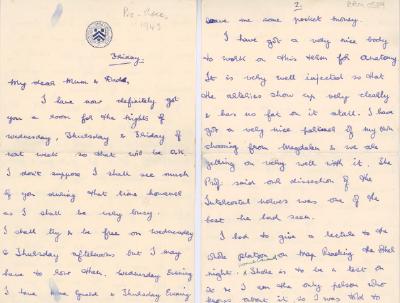 A handwritten letter from Michael Brooks in New College, Oxford, to his parents before the 1943 Boat Race, in which he rowed. He says the race will be rowed from Abingdon to Radley instead of Henley, because of transport problems. 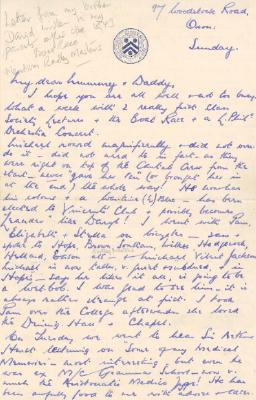 A handwritten letter from David Brooks at Oxford, to his parents after the 1943 Boat Race, in which his brother Michael rowed. 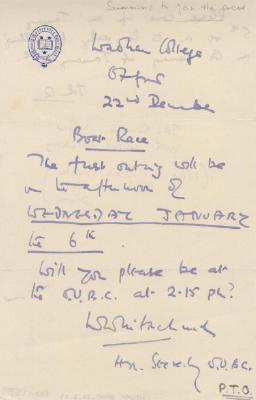 A letter from the secretary of OUBC advising recipient (assumed Michael Brooks) to the first outing being on January 6th. Reference to the 1943 Boat Race.

Letter from Elizabeth Maxwell to Mrs Brooks, 14th November 1943. Then girlfriend of Michael Brooks who rowed in the 1943 Boat Race. 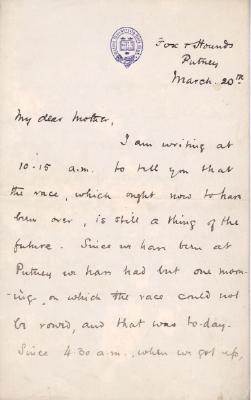 A letter written by George Rowe, President of the Oxford University Boat Club, explaining his frustration at the postponement of the 1880 Boat Race due to fog. The letter was written at the Fox and Hounds pub, Putney on Saturday March 20 1880. Its is written in black ink on one piece of cream OUBC headed notepaper - folded to form four pages. The letter reads: "Fox and Hounds Putney March 20th My dear mother, I am writing at 10.15am to tell you that the race, which ought now to have been over, is still a thing of the future. Since we have been at Putney we have had but one morning on which the race could not be rowed, and that was today. Since 4:30am, when we got up, a steady dense fog has been rolling over Putney and the Cambridge President and I, had, at 8 o'clock, sorrowfully to decide to postpone the race till Monday. I have had a good many disappointments since I was made President, but I don't think I was ever so disappointed, as I was today. In addition to the annoyance, expense and bother of a total change of arrangements, we have to undergo another two day's training and all the agony and suspense over again. Of all days to row upon, Monday is worst, as we can't practice on Sunday, and we'll spend the whole day in a state of funk. However, it is no use grumbling anymore, but may I never be President of anything else ever again. I am surprised to hear that Mary (?) is still in bed. I believe that it would do her good to be made to get up. Lying in bed makes people imagine they're much worse than they are. I don't quite believe in Devonshire climate: it strikes me that it is as prolific of rheumatism, as possible. Love to all, from Your affable (?) son, George Rowe."

A colour slide of a photograph of the Oxford University Boat Club boathouse before the fire. Part of a collection of photographs taken by John H. Shore.

A colour slide of a photograph of the Oxford University Boat Club boathouse before the fire, with a person on a bicycle visible on the river bank in front of the boathouse. Part of a collection of photographs taken by John H. Shore.

A colour slide of a photograph of Jon Searle, President of Oxford University Boat Club 1989-1990. Part of a collection of photographs taken by John H. Shore.